You are here: Home / Archives / Verb tenses in scientific manuscripts

A key aspect of producing a well-written scientific manuscript worthy of publication is the use of appropriate verb tenses in the different sections of the manuscript. Here, we discuss when/where/how to use the different verb 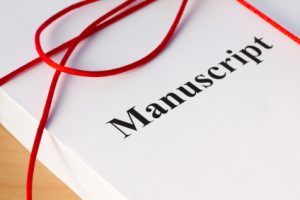 Examples of the verb tenses used in two well-written published papers can be found here and here.

Titles are often not complete sentences.

e.g. Cleavage of structural proteins during the assembly of the head of bacteriophage T4 [1].

In such cases, no verb tense is used.

However, if you do want to use a complete sentence, use the present tense.

A mixture of tenses is used in introductions, including the present tense, the present perfect tense and the past tense.

e.g. Today, just over half of NIH-funded clinical-research participants are women [4].

e.g. While promising, GFP-based methods rely on cellular transfection that proves to be difficult to achieve in certain primary cell types [5].

Present perfect – use when describing actions that happened in the past but are still relevant today:

e.g. Fluorescent polymers and green fluorescent proteins (GFPs) have recently been used for temperature mapping within a living cell [5].

e.g. Certain rigorous studies evaluating the effects of sex differences have been effective in bridging the divide between animal and human work [4].

Past tense – use when discussing previous studies or past events:

e.g. Earlier this year, a study demonstrated that mice with XY chromosomes in the central nervous system had   greater neurodegeneration than did those with XX chromosomes [5];

e.g. More than two decades ago, the US National Institutes of Health (NIH) established the Office of Research on Women’s Health (ORWH) [4].

The tense most often used in the methods section is the past tense, but sometimes the past perfect tense and past progressive tense are required.

Past tense ­– use when describing the materials and methods that were used during the study:

Past perfect tense – use when describing an action that occurred before another action:

e.g. As a substrate, we used degenerately doped silicon onto which a 270-nm-thick layer of SiO2 had been grown [9].

e.g. Once the temperature set in the thermostat had been reached, the system was allowed to equilibrate for 30 min [10].

Past continuous tense – use when describing an ongoing action that occurred in the past:

e.g. Participants were asked to recall what they had been told about post-HCT QOL as they were preparing for transplant [11].

e.g. Patients with relapsed and/or refractory MM whose disease was progressing after two or more prior lines of therapy were eligible to participate [12].

The tense most often used in the results section is the past tense. However, sometimes the present tense is required.

Past tense – use when describing the results of an experiment (which occurred prior to writing the paper, hence the use of the past tense):

e.g. Analysis of the identified gene set revealed the induction of a broad-spectrum antipathogen response [13].

Present tense – use when describing results that can now be stated as a general fact:

As with introductions, a mixture of tenses is used in the discussion sections of scientific manuscripts, including the past tense, the present tense and the future tense.

Future tense – use when discussing the implications of the study:

e.g. Demonstrating whether forest elephants use clearings to maintain their relationships will allow us to understand how elephant social relationships vary across the wide range of ecological conditions occupied by both forest and savannah elephants [15].

Mixed tenses in the one sentence

e.g. Males were [past] more likely to be responsible for the creation of mixed groups, despite a female bias in the visiting population, and therefore appear [present] to be more socially exploratory and less socially choosy than females, as seen in savannah elephants [15].

Present tense – use when referencing the figures/tables in the text

e.g. Selected examples are shown in Table 1 and Fig. 2.

Table and figure legends should be standalone i.e. descriptive enough to be understood by your intended audience without having to read the main text. Due to this need to be independent from the rest of the text, the structure of a legend may somewhat resemble that of a pared-down paper, including a title and short descriptions of both the methods and the results [16]. Therefore, a mixture of tenses is used.

e.g. Figure 1. Number of copulations per 6 h during an entire breeding attempt [title – no tense]. Data are shown [present] as median and interquartile range. (a) Pairs were caring [past continuous] for their larvae. (b) Larvae had been [past perfect] withheld and pairs were not caring [past continuous] for larvae. For statistical analysis of the time course of copulations, we divided [past] the observation period into six successive time intervals (TI1eTI6), each with a duration of 42 h [15].

The above rules mainly apply to the life sciences (medical science, biology etc.). However, for some of the physical and applied sciences (engineering, maths, computing etc.), the materials and methods and results are often presented in the present tense.

e.g. The design of the integrated LNA-mixer architecture, which operates at ultra-low power supply headroom of 0.5V is [present] based on a fully differential inductive degenerative cascode LNA topology coupled with a double balanced PMOS based mixer in a folded configuration [18].

If you are unsure which verb tense style to use, read recently published articles from the journal you intend to submit to and consult the author guidelines of the target journal.

Figure Formatting
Adjust resolution, size, colours, and font in your figures to ensure that they comply with the journal’s guidelines.

Custom Illustration
We specialise in graphic reproduction and custom drawing based on sketches supplied.

Journal Specific Formatting
We can tailor your paper to meet the ASME target journal’s specific requirements.

Response to Reviewers
Our experts can help you respond clearly and professionally to each point in the reviewers’ comments.

This website uses cookies to improve your experience while you navigate through the website. Out of these, the cookies that are categorized as necessary are stored on your browser as they are essential for the working of basic functionalities of the website. We also use third-party cookies that help us analyze and understand how you use this website. These cookies will be stored in your browser only with your consent. You also have the option to opt-out of these cookies. But opting out of some of these cookies may affect your browsing experience.
Necessary Always Enabled
Necessary cookies are absolutely essential for the website to function properly. This category only includes cookies that ensures basic functionalities and security features of the website. These cookies do not store any personal information.
Non-necessary
Any cookies that may not be particularly necessary for the website to function and is used specifically to collect user personal data via analytics, ads, other embedded contents are termed as non-necessary cookies. It is mandatory to procure user consent prior to running these cookies on your website.
SAVE & ACCEPT